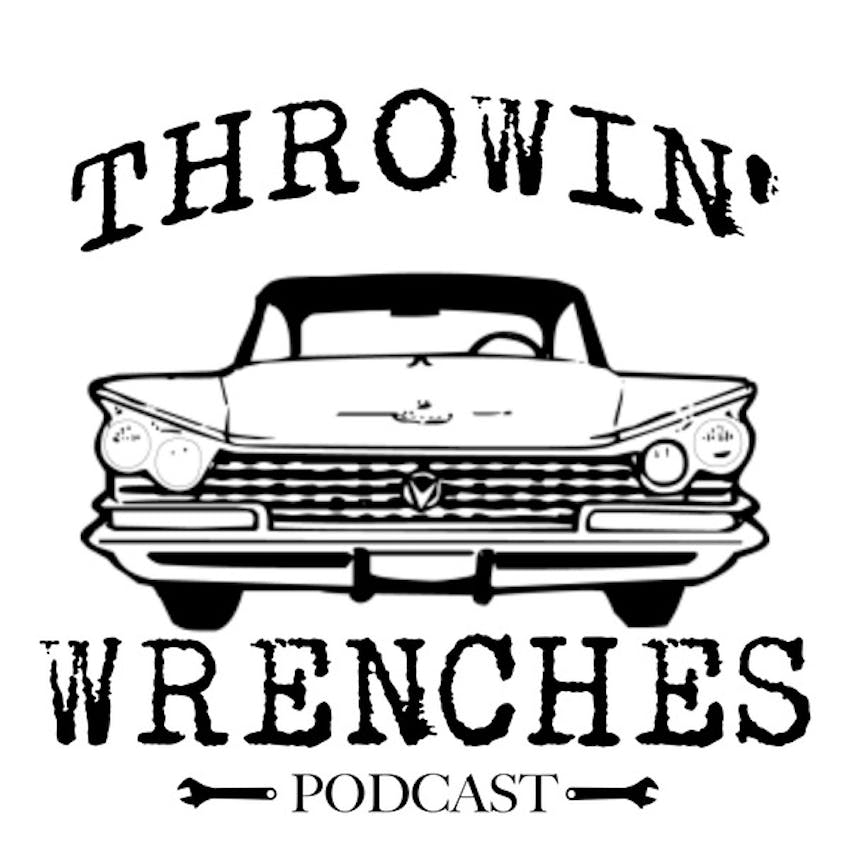 The stage is set. Christmas is here, and you don’t have to roll into work for the next few days. Perhaps the family is in town and you’re looking for things to do. Why not introduce your friends and loved ones to the Throwin’ Wrenches Christmas Podcast? This year’s episode doesn’t feature Chevrolet Astro or Plymouth Volare stories. Instead, Eric and Daryl decided after watching Ford V Ferrari that it might be fun to rattle off a list of car films they enjoy watching.  Films we enjoy watching over and over… Much to our wives dismay!

Not every film on Eric and Daryl’s “Top 5” lists are action-packed Jerry Bruckheimer thrillers. Quite the contrary, some of these are family-friendly dramas adapted from classic novels and stage plays. Then there’s a few comedies, and even a Steve McQueen film involving a combine chase scene through a cornfield.

Over the coming weeks, winter will finally settle in. The garage projects and summer car shows are as far away as the moon. Now is the perfect time to let the kids play with their new Christmas gifts, pour yourself a tasty beverage and disappear for a few hours with one of these stellar movie picks from your friends at Throwin’ Wrenches.

Mel Gibson… He was the ultimate driver before he was getting pulled over in Hollywood for hitting the bottle too hard.  This is the origin story that usually gets left out of the conversation when talking to people who have a slight “know” of the franchise.  Long before the newest Mad Max movie, with its giant production value and with vehicles equipped with all kinds of killing contraptions… There was ex-police officer, Max, who was raging down Australian roads with a muscle car police cruiser.  This movie is raw, brutal and filmed in a frantic style that was ahead of its time.  Seek it out!

As usual, the Internet Movie Car Database saved me on this one.  I didn’t even know that the police interceptors were Ford Falcons from 73 and 74.  They look like cool movie props created for the movie.

Every car in this film according to IMCDB 4.  Better off Dead (1985) Why it’s Cool Savage Steve Holland’s masterpiece starring John Cusak.  Its an 80’s sleeper with a cool car, street racing and its a Christmas movie!

The 1973 Ford LTD Wagon resonated with the kid who drove a 78 Volare.  If Lane Myers was stuck in a bad family sedan and could still win a few girls… There was still hope for the rest of us adolescent slobs!

Who didn’t love the 1967 Chevy Camaro?   It started the movie in a state of disrepair.  Only to be resurrected by a LA Dodgers loving, french exchange student names Monique.  Long story short: Guy falls into friend zone with a girl while working on his beat-up old car… And turns this $500 purchase into a sleek and sexy black beast.

If you have seen this movie, you will be hard pressed to forget the 1965 Ford Falcon Brothers… Who learned how to speak English from watching Howard Kossel and the Wide World of Sports.  They are show up several times to test Lanes courage.

The website is down… but you can find a few articles about the Better Off Dead Camaro online.  Or maybe betteroffdeadcamaro.com will show up again???

Every car in this film according to IMCDB 3. The Hunter (1980) Why it’s Cool Its Steve McQueen.  Isn’t that enough?

Steve McQueen – America’s last bounty hunter!  Ralph Thorson.  Its a dated tough guy movie that features a Steve McQueen that is about as human as he has ever played.

The reason its on this list are the iconic scenes with a Trans Am being destroyed in a cornfield as its chased by a combine.  (Filmed in a cornfield in Manteno IL).   This film also features the all-time classic scene of a car falling countless stories into the Chicago river from the Marina City Towers.   A scene that plays in my head every time I am looking at the towers from Dearborn and Wacker drive.

The makers of the movie actually fitted the Lotus with the gear to go underwater.  Air system, electric navigation motors and that the missile launcher in the back window was real!  All told, they spent 100K in 1977 dollars in the Lotus!

Bond movies are known for all the cool gizmos and tech that seems on the edge of reality.  This car was one of the best Bond gadgets of all time.  The villains were also showing off some cool tech, the motorcycle side-car bomb was a nice touch during the car chase before launching off a pier.

Most Any James Bond movie are cool to boys of the generation who grew up watching them.  If you were truly a fan, there was nothing finer than grabbing the collectible Corgi cars at the KB Toys in Eastland Mall.  My brother and I both collected the Corgi Bond cars.  His fave was the silver dB7 with its ejector seat. Mine was a white Lotus Esprit with hydroplanes that popped out of the sides and shot missles (that could actually take an eye out).

Low point:   Watching James receive a message on his watch that is printed out like a label maker.  It looks terrible and was not very visionary for the future.  That said, Brother Office Equipment might be able to replicate this device today!

Every car in this film according to IMCDB Moment of Musk! From Autoblog:  The time Elon Musk paid $1 million for James Bond submarine car that cost a couple $100.  The trust is stranger than fiction sometimes! Why it’s Cool   Car movies should be fun.  A few of the ones I have on this list involve violence and some light maiming.  Not this  Hal Needam directed Burt Reynolds movie.   This one was an all-star excuse to cause chaos across the USA.

The cast list is all over the board.  Sammy Davis Jr and Dean Martin dressed as priests driving a Ferrari.  Terry Bradshaw and Mel Tillis in the Hawaiian Tropic NASCAR.  Roger Moore driving the DB7 thinking he is still James Bond.  A young Jackie Chan adds to the comedy as the team from Japan that seem oblivious to everything going on around them in their supercharged Subaru.

The power team in this movie though it Burt Reynolds and Dom Deluise.  My God were these guys funny together.  If you cant laugh with these two guys…  Stop being my friend!

Smokey and the Bandit – This could have been a separate entry, but we will leave the Hal and Burt movies as one entry.

Dustin Hoffman may have won the Oscar, but the 1949 Buick Roadmaster convertible in this Barry Levinson film was the real star. The Buick was also the root of the family drama in this story. The story takes Tom Cruise and Dustin Hoffman through the country’s two-lane U.S. highways where their characters learn about themselves and the roots of a strained family relationships. Great performances all-around here. There’s also some epic Tom Cruise freakouts. Hans Zimmer won an Oscar for best musical score. Perfect cruise music, too. Check this one out for some great road scenes.

Every car in this film according to IMCDB 4. Driving Miss Daisy(1989) Why it’s Cool

From the poor late 40’s Chrysler in the beginning to the Hudson Commodore sedan to the beautiful ‘55 Cadillac… the vehicles move through time in this Jessica Tandy and Morgan Freeman classic. Yes, this movie is as exciting as prune juice, but it’s a healthy serving of true friendship. A heartwarming story with a talented pair of actors and some lovely cars. Hans Zimmer also did the soundtrack in this one.  (I’m also a soundtrack nerd.)

Every car in this film according to IMCDB 3. Blues Brothers  (1980) Why it’s Cool

Director John Landis said the cars in this film danced. He actually related the driving stunts to choreography, and I think he nailed it. ‘Nuff said. This is a perennial classic that I’ll stop everything and finish watching no matter when I join it in-progress. As a Chicagoland native, this movie speaks to me in so many ways. Mostly what speaks to me are the big-block Mopars at wide-open throttle for 75% of the film. Our Lady of Blessed Acceleration always comes through. Humor by the truckload and a lot of chase scenes and carnage add up to a winning combination.

Every car in this film according to IMCDB 2. Christine (1983) Why it’s Cool

Anyone with an evil car can relate to this. Some of you know what I’m talking about. This Stephen King classic adapted for the big screen by Halloween (1978) director John Carpenter is all about loners and ghosts. I saw this movie in high school and it stuck with me as I was a little nerdy and drove a ‘64 Chevy. I did not run anyone over, or turn into a jerk. My car also didn’t rebuild itself, but everything else was pretty similar to my formative years. Great synthesizer-heavy soundtrack by director John Carpenter. Always fear the Plymouth!

EuroTRASHED! Jean Reno, DeNiro, and the talented Skip Sudduth did most of the driving in the Audi S8 that takes quite a beating in this John Frankenheimer film about mercenaries who get double-crossed. Frankenheimer also did The French Connection (1971) and knew how to film a car chase!  With heart-racing driving stunts involving a ton of European gems like a BMW E34 M5, and great audio for the time, Ronin still holds up as a great film for gearheads.

Every car in this film according to IMCDB What Films Did We Miss?

We know there are hundreds of other great films that feature cars in some way, shape, or form. What are your go-to flicks? Share your top 5 with us at info@throwinwrenches.com and we’ll make sure to give you a shout-out on the next show.

We hope you enjoyed this holiday wrap-up of our favorite gearhead movies. If you haven’t seen any of these, the holidays are a perfect time to catch up and enjoy some rest & relaxation.

In the meantime, we hope you have a wonderful holiday season, and we’ll see you next year!

Special thanks to our sponsors for helping to make this program possible.