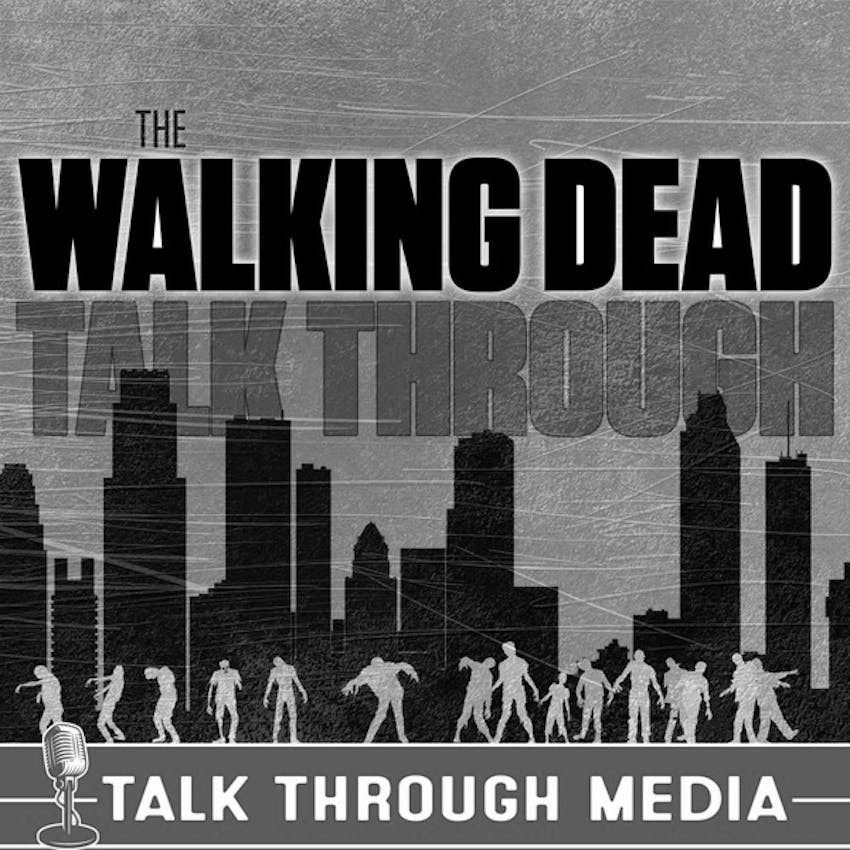 Fear’s back! For this episode 68 of Fear the Walking Dead Talk Through, LT, Kyle and I talk through The End is the Beginning. Fear the Walking Dead Season 6 Episode 1 was written by the showrunners Ian Goldberg & Andrew Chambliss, and directed by Michael E. Satrazemis. We also discuss a little bit about World Beyond Episode 2 titled The Blaze of Gory.

This episode begins with some dudes spraying graffiti, a dude with a dog who likes to chop off heads, with a call from Ginny who is still looking for Morgan, dead or alive. So it’s a relief (not that all of us didn’t expect it) that Morgan, while in bad shape, is still alive and moseying around Texas. He has some new digs in a water tower and met a new friend but Ginny is looking for him and sent a head collecting bounty hunter with a dog after him. It sets the stage for a very western-style season that we are very looking forward to.

A great start but there were some missteps.

We enjoyed the episode as a whole but there were some silly things that we are all too accustomed to with Fear. LT really made the point that the show is called The Walking Dead so if our group ever has wheels there always something that forces them back on their feet. But if you have a Truck! A four-wheeling behemoth that a few fallen trees and clearly a way to drive around it makes you have to abandon all hope and have to hoof it the rest of the way? I mean, really? Some of our listeners didn’t like the fact that Emile the bounty hunter is only going to be in this first episode and he really did have more to his story that would have been interesting to see. But oh well at least Morgan is still alive.

Please leave your feedback! We will be covering Fear The Walking Dead in it’s entirety but if you have feedback about the Spinoff World Beyond we will cover that too, but the main focus will be with Fear! Next time, we’ll cover feedback we get for S6E2 Welcome to the Club, and then briefly talk through any feedback for The Walking Dead: World Beyond S1E3, titled The Tyger and the Lamb. Get your feedback in by 6 PM Eastern/5 PM Central on Tuesday, October 20, 2020. One of the best ways to submit feedback is on our Facebook group. You can also send us an email at our new email: walkingdead@talkthroughmedia.com or call our new voicemail at 216-232-6146.

We could still use your help!

This season, collecting the feedback has been challenging, and we could use your help. Our availability is limited for each of us on Tuesdays when the bulk of the feedback comes in. We have to grab it from the various sources, including the Facebook group, the feedback form, email, and voice mail; put it into a Google doc; separate it into the appropriate sections of the podcast: Ratings, sauces, and feedback; and then fix things like spelling mistakes, grammar, and format, and then divide it by who will read it. If you are available most Tuesdays that we have an episode to record and want to help the podcast out, please drop us a line, either using the feedback form, the Facebook group, or if you are friends with us on Facebook, over Messenger. We’ll work out something if you can.

Don’t forget that we have our Patreon at https://www.patreon.com/WalkingDeadTalkThrough! I have a press pass but need some help with the costs of getting and staying there. Please remember to subscribe to us on Apple Podcasts or whatever is your podcast client of choice. Subscribing to us helps us move up in the rankings, so it’ll help us out tremendously! You’ll also get new episodes when they’re released. And while you’re in there, leave us a rating or review! It only takes a few minutes and it also helps us out! And join our Facebook group!