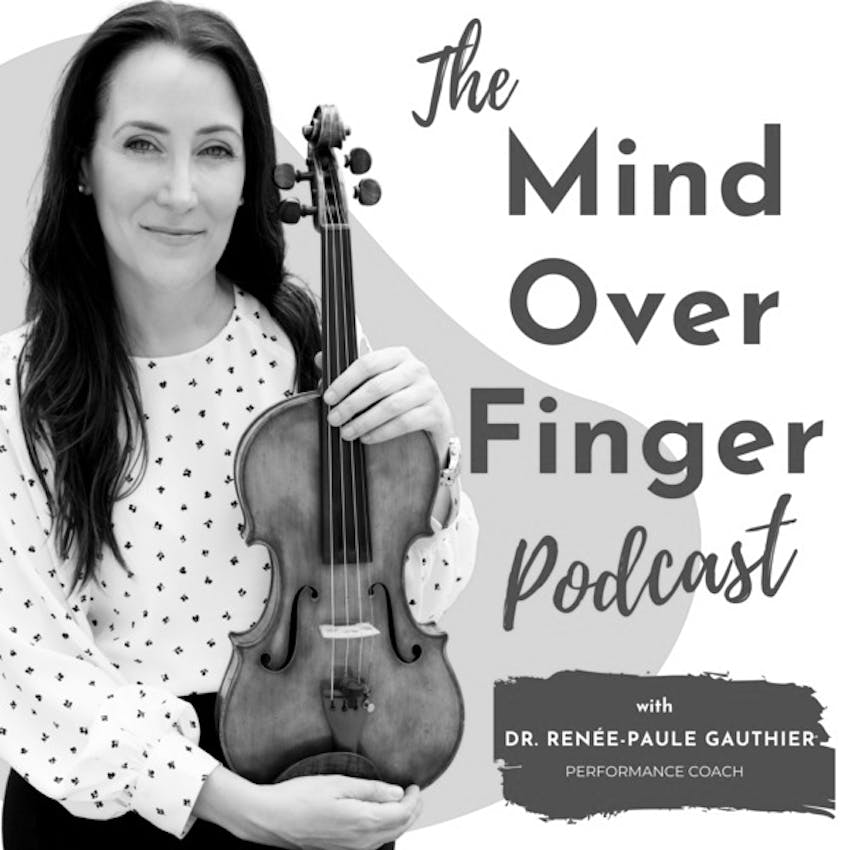 The Mind Over Finger Podcast

In this episode, I have the great pleasure of speaking about all things mindful practice with international cello soloist Alisa Weilerstein.

Alisa has attracted widespread attention for her playing that combines natural virtuosity and technical precision with impassioned musicianship.

In this episode, Alisa shares insight on:

It’s an information and inspiration packed episode and I hope you enjoy and find value in our discussion!

Alisa Weilerstein is one of the foremost cellists of our time. Known for her consummate artistry, emotional investment and rare interpretive depth, she was recognized with a MacArthur “genius grant” Fellowship in 2011. Today her career is truly global in scope, taking her to the most prestigious international venues for solo recitals, chamber concerts, and concerto collaborations with all the preeminent conductors and orchestras worldwide. “Weilerstein is a throwback to an earlier age of classical performers: not content merely to serve as a vessel for the composer’s wishes, she inhabits a piece fully and turns it to her own ends,” marvels the New York Times. “Weilerstein’s cello is her id. She doesn’t give the impression that making music involves will at all. She and the cello seem simply to be one and the same,” agrees the Los Angeles Times. As the UK’s Telegraph put it, “Weilerstein is truly a phenomenon.”

Bach’s six suites for unaccompanied cello figure prominently in Weilerstein’s current programming. Over the past two seasons, she has given rapturously received live accounts of the complete set on three continents, with recitals in New York, Washington DC, Boston, Los Angeles, Berkeley and San Diego; at Aspen and Caramoor; in Tokyo, Osaka, Guangzhou, Shenzhen, London, Manchester, Aldeburgh, Paris and Barcelona; and for a full-capacity audience at Hamburg’s iconic new Elbphilharmonie. During the global pandemic, she has further cemented her status as one of the suites’ leading exponents. Released in April 2020, her Pentatone recording of the complete set became a Billboard bestseller and was named “Album of the Week” by the UK’s Sunday Times. As captured in Vox’s YouTube series, her insights into Bach’s first G-major prelude have been viewed almost 1.5 million times. During the first weeks of the lockdown, she chronicled her developing engagement with the suites on social media, fostering an even closer connection with her online audience by streaming a new movement each day in her innovative #36DaysOfBach project. As the New York Times observed in a dedicated feature, by presenting these more intimate accounts alongside her new studio recording, Weilerstein gave listeners the rare opportunity to learn whether “the pressures of a pandemic [can] change the very sound a musician makes, or help her see a beloved piece in a new way.”

Earlier in the 2019-20 season, as Artistic Partner of the Trondheim Soloists, Weilerstein joined the Norwegian orchestra in London, Munich and Bergen for performances including Haydn’s two cello concertos, as featured on their acclaimed 2018 release, Transfigured Night. She also performed ten more concertos by Schumann, Saint-Saëns, Elgar, Strauss, Shostakovich, Britten, Barber, Bloch, Matthias Pintscher and Thomas Larcher, with the London Symphony Orchestra, Zurich’s Tonhalle Orchestra, Frankfurt Radio Symphony, Gürzenich Orchestra Cologne, Tokyo’s NHK Symphony, the New York Philharmonic, and the Houston, Detroit and San Diego symphonies. In recital, besides making solo Bach appearances, she reunited with her frequent duo partner, Inon Barnatan, for Brahms and Shostakovich at London’s Wigmore Hall, Milan’s Sala Verdi and Amsterdam’s Concertgebouw. To celebrate Beethoven’s 250th anniversary, she and the Israeli pianist performed the composer’s five cello sonatas in Cincinnati and Scottsdale, and joined Guy Braunstein and the Dresden Philharmonic for Beethoven’s Triple Concerto, as heard on the duo’s 2019 Pentatone recording with Stefan Jackiw, Alan Gilbert and the Academy of St. Martin in the Fields.

Committed to expanding the cello repertoire, Weilerstein is an ardent champion of new music. She has premiered two important new concertos, giving Pascal Dusapin’s Outscape “the kind of debut most composers can only dream of” (Chicago Tribune) with the co-commissioning Chicago Symphony in 2016 and proving herself “the perfect guide” (Boston Globe) to Matthias Pintscher’s cello concerto un despertar with the co-commissioning Boston Symphony the following year. She has since reprised Dusapin’s concerto with the Stuttgart and Paris Opera Orchestras and Pintscher’s with the Gürzenich Orchestra Cologne and with the Danish Radio Symphony and Cincinnati Symphony, both under the composer’s leadership. It was also under Pintscher’s direction that she gave the New York premiere of his Reflections on Narcissus at the New York Philharmonic’s inaugural 2014 Biennial, before reuniting with him to revisit the work at London’s BBC Proms. She has worked extensively with Osvaldo Golijov, who rewrote Azul for cello and orchestra for her New York premiere performance at the opening of the 2007 Mostly Mozart Festival. Since then she has played the work with orchestras around the world, besides frequently programming his Omaramor for solo cello. Grammy nominee Joseph Hallman has written multiple compositions for her, including a cello concerto that she premiered with the St. Petersburg Philharmonic and a trio that she premiered on tour with Barnatan and clarinetist Anthony McGill. At the 2008 Caramoor festival, she premiered Lera Auerbach’s 24 Preludes for Violoncello and Piano with the composer at the keyboard, and the two subsequently reprised the work at the Schleswig-Holstein Festival, Washington’s Kennedy Center and for San Francisco Performances.

Weilerstein’s recent Bach and Transfigured Night recordings expand her already celebrated discography. Earlier releases include the Elgar and Elliott Carter cello concertos with Daniel Barenboim and the Staatskapelle Berlin, named “Recording of the Year 2013” by BBC Music, which made her the face of its May 2014 issue. Her next album, on which she played Dvořák’s Cello Concerto with the Czech Philharmonic, topped the U.S. classical chart, and her 2016 recording of Shostakovich’s cello concertos with the Bavarian Radio Symphony and Pablo Heras-Casado proved “powerful and even mesmerizing” (San Francisco Chronicle). She and Barnatan made their duo album debut with sonatas by Chopin and Rachmaninoff in 2015, a year after she released Solo, a compilation of unaccompanied 20th-century cello music that was hailed as an “uncompromising and pertinent portrait of the cello repertoire of our time” (ResMusica, France). Solo’s centerpiece is Kodály’s Sonata for Solo Cello, a signature work that Weilerstein revisits on the soundtrack of If I Stay, a 2014 feature film starring Chloë Grace Moretz in which the cellist makes a cameo appearance as herself.

Born in 1982, Alisa Weilerstein discovered her love for the cello at just two and a half, when she had chicken pox and her grandmother assembled a makeshift set of instruments from cereal boxes to entertain her. Although immediately drawn to the Rice Krispies box cello, Weilerstein soon grew frustrated that it didn’t produce any sound. After persuading her parents to buy her a real cello at the age of four, she developed a natural affinity for the instrument and gave her first public performance six months later. At 13, in 1995, she made her professional concert debut, playing Tchaikovsky’s “Rococo” Variations with the Cleveland Orchestra, and in March 1997 she made her first Carnegie Hall appearance with the New York Youth Symphony. A graduate of the Young Artist Program at the Cleveland Institute of Music, where she studied with Richard Weiss, Weilerstein also holds a degree in history from Columbia University. She was diagnosed with type 1 diabetes (T1D) at nine years old, and is a staunch advocate for the T1D community, serving as a consultant for the biotechnology company eGenesis and as a Celebrity Advocate for JDRF, the world leader in T1D research. Born into a musical family, she is the daughter of violinist Donald Weilerstein and pianist Vivian Hornik Weilerstein, and the sister of conductor Joshua Weilerstein. She is married to Venezuelan conductor Rafael Payare, with whom she has a young child.

Visit www.mindoverfinger.com and sign up for my newsletter to get your free guide to a super productive practice using the metronome!  This guide is the perfect entry point to help you bring more mindfulness and efficiency into your practice and it’s filled with tips and tricks on how to use that wonderful tool to take your practicing and your playing to new heights!

Don’t forget to visit the Mind Over Finger Resources’ page to check out amazing books recommended by my podcast guests, as well as my favorite websites, cds, the podcasts I like to listen to, and the practice and podcasting tools I use everyday!  Find it here: www.mindoverfinger.com/resources!

And don’t forget to join the Mind Over Finger Tribe for additional resources on practice and performing!

If you enjoyed the show, please leave a review on iTunes!  I truly appreciate your support!

Also a HUGE thank you to my fantastic producer, Bella Kelly!