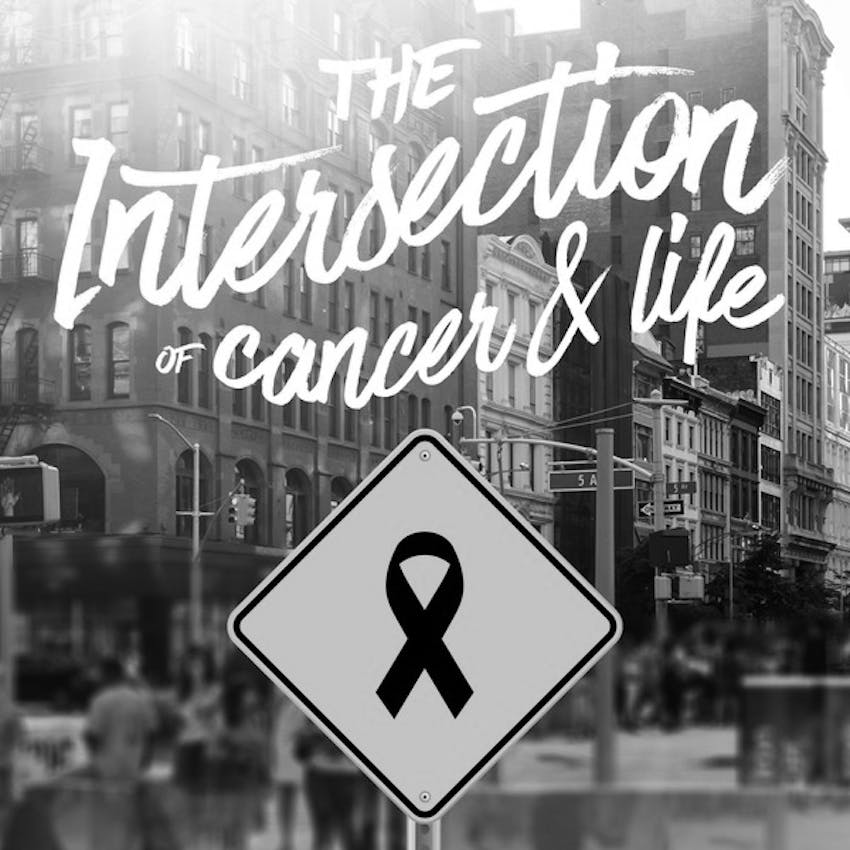 The Intersection of Cancer and Life with Emily Garnett

Episode 30: Being with Babish with Andrew Rea

Way back in The beginning of 2019- which feels like a lifetime ago- I was starting a clinical trial as my second line of treatment. I had just experienced progression for the first time. I was angry - so pissed that my treatment hadn’t worked, that I hadn’t gotten more time, time I naively thought I would have- time that I thought was owed to me. My husband was pissed too- we had been blindsided, shaken out of a dull comfortable lull that things would be ok. Life with metastatic breast cancer is like living with a terrifying clown in the shadows, and I hate clowns, so I’m just going to leave that there. You know where I’m going with this.

My husband and I had been together for, at the time, almost 11 years. We met when we were babies- he was 22, and I was 23, less than a year out of college. We were both at a party hosted by mutual friends, but our paths had never before crossed. After noticing my bright-red patent leather heels (which he claimed, and still maintains, that he hated, but what are red heels for if not to be noticed in them?) we struck up an easy conversation, introducing ourselves. I asked him what he did- as 20-Somethings in New York are apt to do, and in what became the most fateful pickup line ever to exist in the universe, he responded to me: “I’m a custom wood furniture maker, like Aiden, from Sex and the City. Or Jesus.”

But back to the beginning of the year: Christian and I were spending an evening watching YouTube cooking videos, a favorite shared pastime. One of our favorites at the time was Binging with Babish; for those not familiar with the show, it is a witty, slick YouTube cooking show showcasing meals from pop culture, with an obscure, non-sequitur West Wing reference in the title. We loved it. One evening, at the end of the show, Andrew, the host, put out a call for people to write in, asking to hear about fans who had specific accomplishments to celebrate, fans in need, or fans who were just going through hard times. My husband, the quintessential fan, was going through the worst stuff of his life- what did I have to lose? So I emailed Andrew, explaining my diagnosis, my prognosis, and the challenges Christian was facing as a husband, father, professional, and person, watching his wife navigate this horrible disease in a somewhat frustratingly helpless way. Again, you know where I’m going with this. (And I’m not going to give away any spoilers just yet!)

Especially as a mother, I have been surprised at the outpouring of support, of love, and of kindness directed my way. I can’t begin to thank all of the people who came out of the woodwork, and who came out of the comforts of their own lives, to support me. But so often, the caregiver, the spouse, the co-parent, is overlooked. There is so much focus on the sick person that the massive, massive impact on family members can get lost in the fray. And fraying was exactly what was going on with my husband’s mental state at the time. As the months of 2019 went on, we were hit relentlessly with more and more bad news: progression into my brain requiring radiation, ineffacacies of treatment, and numerous treatment changes that became harsher and harsher as my body resisted them. My husband became depressed- and understandably so! His wife was dying! So I told them about Christian, the person who had unwaveringly done so much for me over the last decade plus, and was now facing down his own nightmare. I didn’t want anything for myself, but I wanted Christian to have a moment in time to be taken out of this nightmare. I think my email was titled something along the lines of “You Guys Need To Hang Out With My Husband And Here Is Why.” And holy shit- Andrew and the Babish crew came through for him in an unforgettable, amazing way. Andrew and I talk a bit about those adventures in this episode, but you really need to watch his episode of Being With Babish over youtube to fully appreciate how amazing he- and this insane surprise- was, and is. We are both so incredibly grateful for Andrew and the Babish crew for welcoming us into the Babish-fam without a second thought. And as always, all links will be in the show notes.

As much as Andrew is just phenomenal- and believe me, you guys, somehow he is nicer and more awesome in person than on the show, he feels so strongly about this issue, too. His mother died of metastatic breast cancer when he was 11. He gets it- and he was willing to share some of those insights into his life, his childhood, and the deeply permeating difficulties of this disease, both for the parent and for the family members around them. In this episode, Andrew and I talk about his childhood, the challenges and difficulties of being a kid with a sick mom, and what he wished he had known, and had been afforded to him at the time. We also talk about the fantastic surprise we pulled off, and so much more.

Binging with Babish’s Andrew Rea is one part chef, one part filmmaker, generous dash of irreverent YouTube personality, heaping handful of bourbon enthusiast, cyclist and karaoke singer to taste. He endeavors to entertain, enlighten, and encourage his audience from his New York, NY kitchen. His second book, Binging with Babish, was recently released to rave reviews, and can be found at the Binging with Babish website, among other places, linked below.

Unfortunately, I don’t record this update with good news. We learned recently that my disease has progressed again, despite harsh chemotherapy, and is now present in my bones, lymph nodes, very active in my liver, and now, in my cerebral spinal fluid and brain meninges, in addition to my brain tissue. This is called leptomeningeal metastasis, and it is generally considered one of the worst case scenarios. There are no standard effective treatments for it, and it can, and often does, progress very rapidly. The life expectancy for this disease development is grim- often 2-4 months. A significant response to treatment is to live for a year. I have been exploring additional options for treatment, and am working with my care team to develop a somewhat unusual plan, the details of which are still getting pieced out, but I will update as they come together. In essence, it involves a very harsh targeted chemo in conjunction with full brain and spinal cord radiation, both of which terrify me, and come with their own set of side effects and complications. We are facing the barrel of a gun, no longer asking whether this chamber is loaded, but wondering just how long I can live with a bullet lodged in my face. It feels like a nightmare. It IS a nightmare. And at the end of the road, Christian is going to be the one to have to pick up the pieces and figure out what life will look like for himself and our son, Felix (who just turned 4 - Happy birthday, buddy! Mommy and daddy love you more than you could ever know!) So thank you, Andrew, for giving my husband and our family some truly spectacular memories, and thank you too for your candid willingness to talk to me about this intensely difficult, but important, subject.

As of this episode’s release, I am, unfortunately, going to be stepping away from the podcast for a bit in order to focus on my next few treatments. However, if you’re so inclined, feel free to reach out, and I can’t wait to release the next batch of incredibly amazing guests.