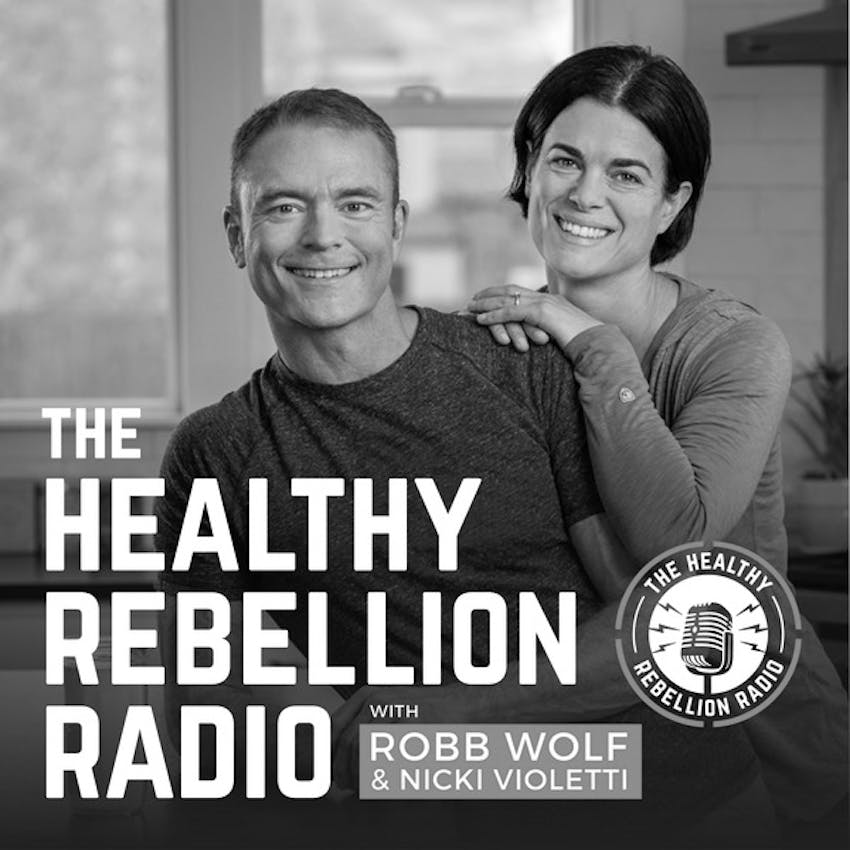 What is Healthy Weight, Acid Reflux During Fasting, Long Term Antibiotic Use - Lyme Disease, Women Over 40, Controversy Over Meat

Make your health an act of rebellion. Join The Healthy Rebellion

Submit your questions for the podcast here Show Notes:

Conclusion: Diets high in seafood, rice, and red meat other than pork and low in refined grains, fried foods, sugar-sweetened beverages, and wheat are leading healthy dietary factors for metabolic health in children. HDS is strongly predictive of CMR factors.

On THRR045 Chris asked a question about fueling his gymnastics workouts and he mentioned his height and weight, 6’3” and 170 lbs. Robb commented that he (Chris) was too skinny because Robb is 6 inches shorter and weighs the same. This got me thinking about healthy weight. I’m also in the skinny camp and have had trouble most of my life gaining weight. I’m a 38 year old male, 5’11” and 153 pounds. I follow a mostly paleo (with dairy), sometimes keto diet and usually consume around 3000-3500 calories per day. My weight is very stable at this intake level. I consider myself pretty healthy. I workout 6 times per week for about 1 hour each workout, usually broken out to 2-3 aerobic workouts (cycling) and 2-3 strength sessions with 1 rest/recovery day.

So my question is: is my weight unhealthy? Am I too skinny? Should I try to gain weight? If so, how much?

Keep up the excellent podcast. I’m a huge fan!

I had a quick question that I thought you might be able to shed some light on. For the last few years (5-6) I’ve used IF for health reasons, as well as losing weight for (non competitive) bodybuilding. In the last few months, I’ve experimented with very long fasting windows (18-24 hours) and would like to work 48-72 hour fasts into my routine every month or two... The problem is, around the 18 hour mark, I tend to get VERY BAD acid reflux. In General, AR is something I’ve struggled with since I started lifting weights. I don’t have a restrictive diet, but do occasionally eat wheat products and partake in alcohol (not around fasting time).

Is this a common problem with IF, is there anything you know of that can help mitigate this? If I kept fasting past 24 hours, do you think it would settle down? Should I completely lay off the wheat and alcohol? It’s making this very difficult.

Thank you and God bless,

Since October of last year, I've been plagued with one of the weirdest and most debilitating chronic illnesses I've ever experienced. Extreme fatigue, brain fog, body aches, joint pain, extreme dizziness, and just feeling like crap. After 10 doctors visits, tons of blood work, medical procedures, it turns out I have a bad case of Lyme disease. My Lyme literate MD prescribed me an aggressive treatment of doxycycline, metronidazole, hydroxychloroquine, and bactrim to kill the bugs, which disseminated throughout my entire body. We also try ciprofloxacin - but I felt the worst I've ever felt on that. Fortunately, she has me on a probiotic rich supplementation and eating lots of fermented foods like Kim chi, Kefir, kraut, etc.

Most of the time during this treatment, I have felt like crap. Exhausted, unable to exercise (I was a fit 30 something guy before this - I did BJJ, lifted weights, ran, biked, etc.), and just feeling crummy. I'm almost done with the antibiotic treatment. Any advice on restoring myself to health & wellness? I'm skin and bones, struggle with walking up a modest hill, and try my darnedest to eat enough food - but often times struggle with nausea and low appetite.

Let me know! Thank you.

Hey guys, so I just was listening to your most recent podcast today and want you to know you’re totally appreciated! Ever since reading WIRED TO EAT I am so much more knowledgeable about my body and the foods that make me feel good. And that’s because of you guys...you should be very proud of all you’ve done and all the lives you’ve impacted. Amazing work! So now to my question....

Do you think consumption should decrease for a woman over 40? I’m wondering about total calories, and protein levels, etc. I’ve been mostly paleo since 2014. I had a couple of babies since so my food consumption changed a little during pregnancy and breast feeding. But now I’m back at it and trying to loose some leftover baby weight and oh yeah I just turned 40. I know you usually recommend 1 gram of protein per pound you weigh, but I’m thinking that’s too much now? I workout 4 to 5 times a week; a mix of ashtanga yoga and run/walks (3x ashtanga/2 times run/walk or vice versa)....both activities are pretty rigorous. The rest of the time I’m chasing after my toddlers so I am pretty active. I’m also trying to loose about 40lbs (yeesh). Let me know whatcha think.

Keep up the good work! And stay healthy!

Hi - if the science is so clearly in support of ancestral eating patterns or that meat is a health food and not evil, then why are such a huge number of scientists, doctors, and journalists speaking as if the science is clearly settled in the opposite direction?  How can there be so much controversy if the science is so settled?  I just read Sacred Cow and I am a proponent of ancestral eating and yet just came across yet another article in the Atlantic about Paleo being a fad.  I consider myself evidence-driven and I have been compelled by what I have read the science says that justifies an ancestral diet.  But I also find it disconcerting that there isn't more consensus - if the Paleo community has the science then why isn't everyone else seeing it the same way?  The growing plant-based movement has me even more freaked out.  How can so many people get the facts so wrong?  It makes me wonder what echo chamber I am in.

Robb's notes: The Doctor Who Drank Infectious Broth, Gave Himself an Ulcer, and Solved a Medical Mystery

What Is Real?: The Unfinished Quest for the Meaning of Quantum Physics Adam Becker Basic: 2018.

All hell broke loose in physics some 90 years ago. Quantum theory emerged — partly in heated clashes between Albert Einstein and Niels Bohr. It posed a challenge to the very nature of science, and arguably continues to do so, by severely straining the relationship between theory and the nature of reality.

Becker lingers on the 1927 Solvay Conference in Brussels, where 29 brilliant scientists gathered to discuss the fledgling quantum theory. Here, the disagreements between Bohr, Einstein and others, including Erwin Schrödinger and Louis de Broglie, came to a head. Whereas Bohr proposed that entities (such as electrons) had only probabilities if they weren’t observed, Einstein argued that they had independent reality, prompting his famous claim that “God does not play dice”. Years later, he added a gloss: “What we call science has the sole purpose of determining what is.” Suddenly, scientific realism — the idea that confirmed scientific theories roughly reflect reality — was at stake.

Quantum phenomena were phenomenally baffling to many. First was wave–particle duality, in which light can act as particles and particles such as electrons interfere like light waves. According to Bohr, a system behaves as a wave or a particle depending on context, but you cannot predict which it will do.

But what if a field picks the wrong paradigm? Becker shows how, in the 1950s and 1960s, a handful of physicists dusted off the theories of Einstein and de Broglie and turned them into a fully fledged interpretation capable of shaking up the status quo. David Bohm argued that particles in quantum systems existed whether observed or not, and that they have predictable positions and motions determined by pilot waves. John Bell then showed that Einstein’s concerns about locality and incompleteness in the Copenhagen interpretation were valid. It was he who refuted von Neumann’s proof by revealing that it ruled out only a narrow class of hidden-variables theories.

This episode of The Healthy Rebellion Radio is sponsored by White Oak Pastures. White Oak Pastures is a six-generation, 154-year-old family farm in Bluffton, GA. They pasture-raise 10 species of livestock and practice regenerative agriculture that improves the land. Their cattle and sheep are grassfed, their pork and poultry are pasture-raised and given non-GMO feed. All their meats are raised, slaughtered, and butchered on the farm. They also sell organic vegetables, pasture-raised eggs, honey, pet chews, leather items, tallow goods, and more artisan products that they make on the farm. They are committed to animal welfare, land regeneration, and rural revival. Check them out at http://whiteoakpastures.com/robbwolf and enter code REBEL10 to get 10% off product total ($100 max discount) for first-time customers.