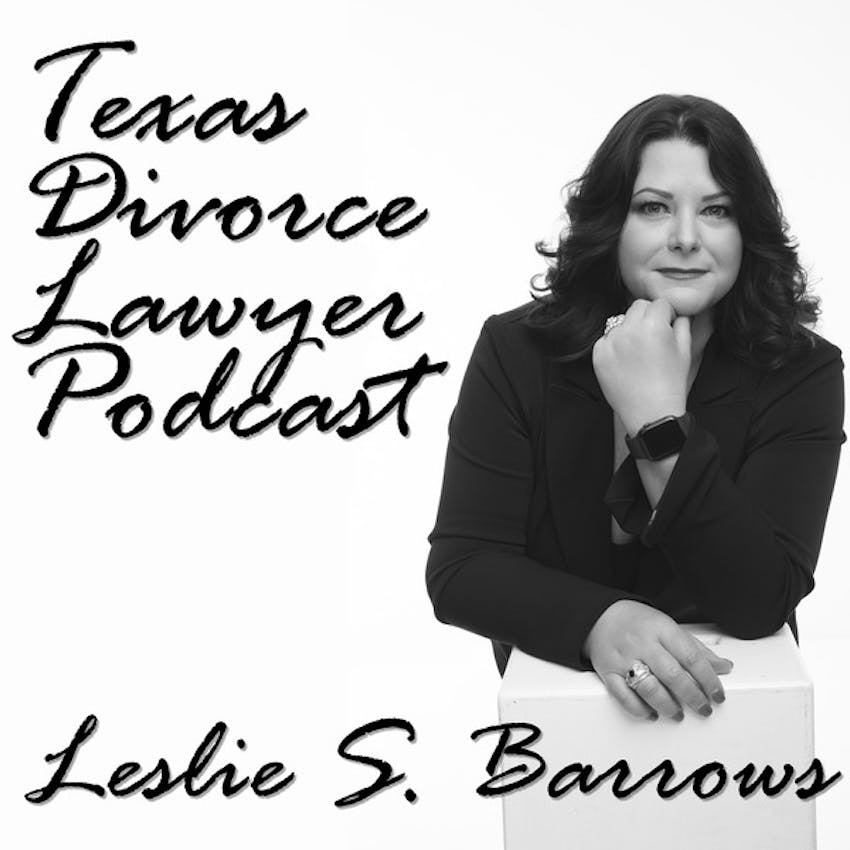 What Does A Modification Case Look Like In Texas

Hi there. I’m attorney Leslie Barrows and you’re listening to the Texas Divorce Lawyer Podcast with me Leslie Barrows. The goal of this podcast is to educate people in Texas about divorce. I want to be able to describe what divorce means, how it affects children, both young and grown and give my listeners a little bit of Hope – especially if they are about to start or are in the middle of divorce proceedings. Welcome to the podcast.

Host: Okay, this is the third podcast of this day. Question number one: What is the overall process of a modification case?

Leslie Barrows: Okay. So a modification is basically ‘I’ve gone I’ve gotten my divorce order things have changed and I want to go back to court’ because I’ve tried to work it out or maybe you’re not talking with the other side and you guys have kids together. So what you would be filing is a modification post-divorce and in the modification, in order to start that process, you’re going to file a petition to modify the last order that you have which a lot of times is going to be the final divorce decree that you received. So if you’re going to petition to modify your divorce decree, and you’re looking at starting that petition and you’re going to change child support would be something. You’re also going to ask that you update or maybe change the health insurance. So that’s something that you can add to that modification. You can also change your possession and access schedule that the parent has with the children.

So how you would start that process is you would retain counsel, file a petition to modify and then you would serve the other party. And then once they had service they’ll file a file an answer with the court. And once that’s done then you can set the case for hearing in order to get the process started and that also allows you to time to obtain financial information or from the other side if you’re trying to modify or increase your child support, which is pretty common. And also if you’re trying to change the possession and access schedule that the parent has with the children or child, then you would make sure that was requested in your petition to modify. And when you go to court then you would have a temporary orders hearing related to your petition to modify at that temporary orders hearing you would make sure that you had the necessary witnesses, that you had written down your wish list of what do I want to accomplish at this hearing? Are you trying to move to a different School District? Are you trying to move out of the county that was in your original divorce? Those are all just a lot of times that’s what will be seen in a modification is someone’s remarried and we’re needing to go in and modify because maybe they need to move or maybe there’s a new job opportunity. That’s come about that we need to modify the final decree of divorce.

Then after that temporary orders hearing you would have to enter into a temporary order which would be signed by the judge and by all parties and that would be drafted and on file with the clerk in whatever County your modification is, and I wanted just to add too if you got divorced or have an order out of another state you need to make sure to give that information to your Attorney so they can transfer the case to the county where you’re currently living if you have access to the children.

Also, a lot of times on a modification there will be a time where the kids that are over twelve the other side can file for or you can file for a motion to confer. So what that is is that the kiddo can go and meet with the judge in Chambers and then we’ll know when we’ll be back up there, except the judge and the child and they can have a preference of where they want to reside or who they want to live with. So we’ll see a lot of those an increase in those cases in August after a child is gone and visited with a parent a lot over the summer. So we will have an increase in those and in August.

So after your temporary orders hearing, you’ll have an order and then what you would do is file a pre-trial scheduling order and make sure you get all those deadlines because that’s really important. You want to make sure that this case moves on that, It’s you know that it’s going to have a final trial setting in case you need that. And then also you’re going to do go to mediation because that’s court ordered that you go to mediation and try to resolve your issues at mediation.

You’ll also have to decide whether or not you want to do Discovery. So the same thing with Discovery is, you know, do we want to invest in depositions. Do we want to do a request for production of documents? Do we need to get medical records? Do we need to get counseling records for the kids? These are all things that you’re going to make sure you want to talk to your attorney about if you’re filing a modification for child support and a modification for possession and access of the children.

Then at mediation, if you guys come to what’s called a mediated settlement agreement that is where everyone signs that at mediation and then and then one of the attorneys will prepare the final order and then that would be entered with the court and signed off by all parties and that would end your case. And if you don’t settle in mediation, you have a chance to go back to court. If you don’t like your temporary orders that you’ve maybe already had and then you would have your case on the trial docket and usually the cases for modifications can take one day to two days. It just depends on the issues that you really have with what you’re trying to modify. So that’s something that you would take into account.

A lot of times too with modifications, if you’re trying to change possession access, you’re probably going to want what’s called a custody evaluation and you really need to start that early on in your process because if you wait till the last minute and you’re up against a trial deadline the social workers really want to have at least six months to conduct that or the custody evaluation and that’s usually done through family court services. If you have a case in Tarrant County that custody evaluator will go and interview relatives. They’ll check your references. They’ll do criminal background checks. They’ll go visit with both homes of this of the other parents. They’ll also interview the children at the parents’ homes, and they’ll even interview the parents in their office. So these are all things that are going to happen if you’re going to need a custody evaluation. If you’re trying to change the possession and access schedule. I guess possession and access for the children and the other spouse or the former spouse.

So I know that’s just a quick General overview of a modification and every case I’m telling you is different and you know, if you need drug testing, if you need CPS records, you know, these are all things that you just have to take Into account. I know my information seems a little general, but it’s it really depends on your case in the intricacies of your case. You know, we see a lot with modifications where you know, they want an increase in child support or they want to equal possession schedule instead of what’s called The Standard Possession Order, which is in a lot of our final divorce decrees.

Thanks for listening to the Texas Divorce Lawyer Podcast with me attorney Leslie Barrows if you Like my show and want to know more check out my website at barrowsfirm.com, or please leave a review on iTunes, Spotify or whichever social media outlet you are listening on. Be sure to join me next time and thanks for listening.