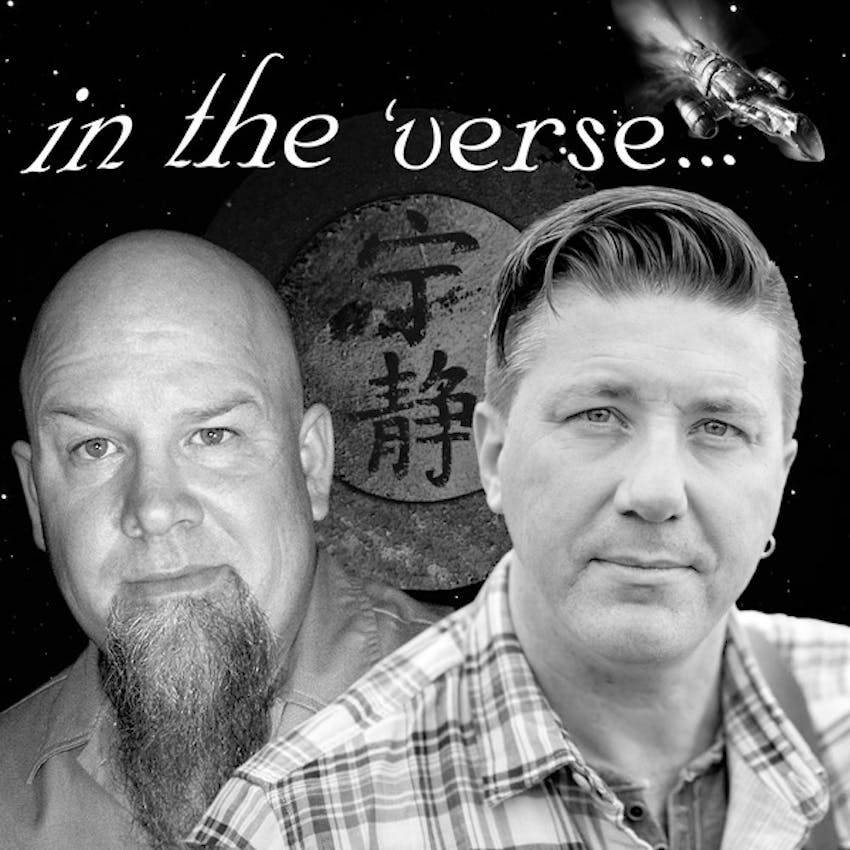 Saffron is back in the Firefly episode "Trash. Let's all get naked and sing songs inspired by this fun heist with everyone's favorite nemesis.

8:53 - Review Songs from the Last Episode

MARC: This is part ELEVEN of our 14 part series. We are rewatching episodes of Firefly. Our goal is to find themes and stories that we can write songs about.

MIKEY: And by supporting Marc at http://patreon.com/marcgunnmusic

MIKEY: The episode opens in a desert, where a naked Mal sits on a rock, staring into the distance and saying to himself: "Yeah… that went well."

MARC: During a cargo transfer 72 hours earlier, Mal meets up with Monty, a war buddy and fellow Browncoat turned smuggler. As Monty's crew unloads cargo, he tells Mal that he's gotten married, introducing his wife Bridget. "Bridget" turns out to be Mal's nemesis Saffron, and a fight breaks out between them. Enraged to learn of Saffron's double-dealing, Monty leaves without her, stranding her on the deserted moon where Mal is waiting for a pickup. Mal orders Saffron to walk away and be left behind, but reconsiders when she tempts him with the prospect of a lucrative heist. Later, Serenity arrives to pick up Mal and the unloaded cargo. Later Mal lets Saffron out of one of the loaded crates in the cargo bay.

MIKEY: In the common room, Saffron describes to the crew her plan to steal a priceless antique laser pistol, the Lassiter, from Durran Haymer, a wealthy collector of Earth-That-Was artifacts. She claims a detailed knowledge of Haymer's security arrangements, but explains that the difficulty lies in getting the weapon off the estate, something Serenity's crew could accomplish. The crew is outraged that Mal has brought Saffron on board, but they reluctantly agree to the plan.

MARC: Jayne is assigned to watch over Simon and River and keep them out of Saffron's sight. River worries about the situation, telling Simon she doesn't trust Saffron and that she knows Jayne had tried to betray the Tams to the Alliance. Meanwhile, Wash and Kaylee instruct Mal and Saffron to dump the collectible pistol, once they procure it, into an automated trash disposal unit, which Kaylee can reprogram to have the trash taken to a remote location where they can pick it up.

MIKEY: Mal and Saffron enter the estate without difficulty. They find the room that houses the well-protected collectible, but are met by Durran himself. Durran rushes to Saffron and embraces her, calling her "Yolanda" and thanking Mal for bringing back his wife, who had apparently disappeared six years ago. Saffron insists that Durran provide some compensation for Mal's "rescue". Durran steps out to get reward money for Mal, to allow them to finish retrieving the pistol. As Durran reenters, he attempts to remonstrate with her, but Saffron knocks him out with a kick and leaves with Mal, who has discarded the antique in the trash chute after which they escape.

MARC: Meanwhile, Wash has been hovering Serenity directly under the trash unit of Haymer's estate while Jayne retrieves the control unit and Kaylee reprograms it, clinging to the ship's hull. A delay arises during the windy EVA when Jayne is incapacitated by an electric shock, but Zoe helps Kaylee replace the control board just in time for the automated pickup vehicle to collect the trash unit. Jayne is dragged back on board by Shepherd Book.

MIKEY: As Mal and Saffron fly toward the rendezvous in Isis Canyon, Mal continues to explore his theory that Durran was Saffron's true love and original husband. Saffron seems to become emotional, but when Mal is off guard, she secures his gun and takes him prisoner. Saffron orders Mal to disrobe as revenge for him seeing her naked in the episode "Our Mrs. Reynolds", and strands him in the desert before proceeding to the drop location.

MARC: As Saffron searches through the garbage for the antique laser pistol, Inara emerges above her to taunt her with the weapon. The Companion reveals that she has been part of the plan all along, knowing that Saffron would get the drop on them somehow and arranging to beat her at her own game of deception. Inara remotely closes the garbage container to trap Saffron for the authorities to pick up later.

MIKEY: On Serenity, the crew discovers that Saffron has again sabotaged their ship, delaying their trip to the rendezvous so that Kaylee can make repairs. Jayne awakens in the infirmary to find that Simon has medically paralyzed him to rest a spinal injury. Simon reveals his knowledge of Jayne's plan to sell out the Tams, but reminds him that Serenity's crew are a team, and that as Jayne's doctor he will never harm him. River, however, warns Jayne that she can kill him with her brain.

MARC: Once repaired, Serenity makes it to Mal's location. Mal and Inara, having reached an understanding, trade jokes about the heist. Mal casually boards Serenity in front of his crew, still unclothed. Wash and Zoe are shocked by the captain's brazenness, but Kaylee cheerfully congratulates Mal as the ship lifts off from the desert.

Marc: I am ever so grateful for the kindness and generosity of Gunn Runners over on Patreon. Thanks to my Glorious Patrons: Alexis, Angela Hughes, Carol Baril, Cary W, Eric Ray, James R., Les Howard, Lilith Marek, Marie Alm, Troy R, William McKissack

Mikey: My Patreon patrons are amazing, and helps keep the music being made. Thank you to all of you, especially Robin Abess, Brian Jackey, John Haight, John R Woolard, Les Howard, Jeremy Jackson and Jennifer Lewis.