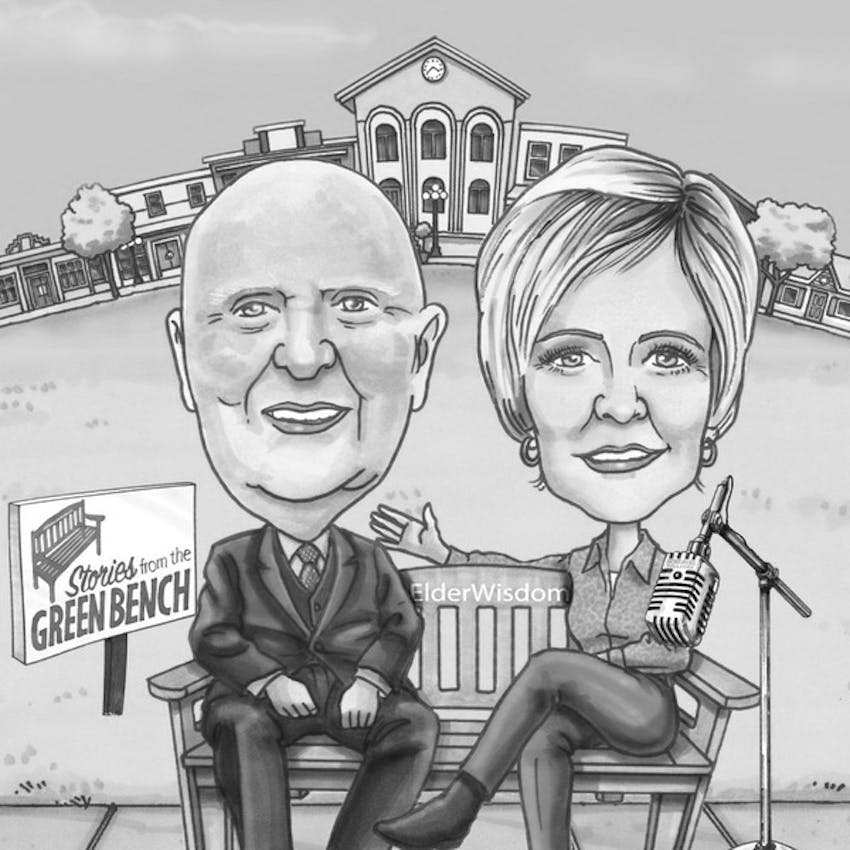 #ElderWisdom | Stories from the Green Bench

David Boehm - A musician living life to its fullest, technology, connections, and dreaming

Episode #12 - This isn't David's first time in front of a mic, he's been providing entertainment for audiences for most of his life. His spirit of living life to its fullest, even as he battles a difficult health challenge, is all about connection.  David shares his Story from the Green Bench from the Schlegel Village, Pinehaven Nursing Home in Waterloo.

Born in Elmira in a little apartment over top of a blacksmith shop.  Has lived in Waterloo for most of his life, with some time in Toronto to work at Steve's Music Store, where he had the privilege of meeting Eddie Van Halen, The Hollies, The Moody Blues, The Police, and others.

A musician from a young age. "My brother was stuck with the accordion and I got to play the Hawaiian guitar." It gave him an insight into the guitar and later led to a Spanish guitar. He joined a high school rock band and they most wanted to be like The Beatles.

His musical career as part of the band called 'The Town Choir' toured across Ontario and New York State.

*Back in 1969 David wrote and recorded a song called 'Smile' with his band.  Lost the tape and recently found it, fixed it up, and got it on a CD.  Jim and Ralph recorded Smile - have a listen.

In grade 13, David had a fight with his dad and left home, sleeping wherever he could find comfort.  A friend's father got him a job and gave him a room.

"I had good friends. Without them, I wouldn't have survived." -David Boehm

Prior to getting married David and his wife-to-be had a son.  Her parents wouldn't allow them to raise him so they had to put him up for adoption.  He has recently connected with his son and enjoys hearing about his life and the lives of his grandchildren. He hopes to one day be able to visit with them.

"Clearly some of those strands of DNA are guitar strings." -Erin Davis to David Boehm regarding his son and his grandchildren

David started up a small company called Aquatic Designs, where he set-up and maintained aquariums.  He has an interest in fish - spent time with the Willowdale Aquarium Society and volunteered at Royal Ontario Museum identifying fishes and going on field trips.

"Learned a lot from being a volunteer at The Royal Ontario Museum." -David Boehm

More in this episode:

"As long as you have love, you are going to be alright." - David Boehm

Subscribe, rate, and review our podcast on any network and share your thoughts on social media using the #ElderWisdom tag to help others find us.

The Green Bench is a symbol of elder wisdom. Physically or virtually, the bench invites us all to sit alongside a senior, share a conversation, or give and offer advice.

It challenges the stigma seniors face; the ageism still so prevalent in society. It reminds us of the wealth of wisdom our elders offer and in doing so, helps restore them to a place of reverence.

"The greatest untapped resource in Canada, if not the world, is the collective wisdom of our elders." -Ron Schlegel

This podcast is brought to you by Schlegel Villages, retirement & long-term care homes in Ontario, Canada.