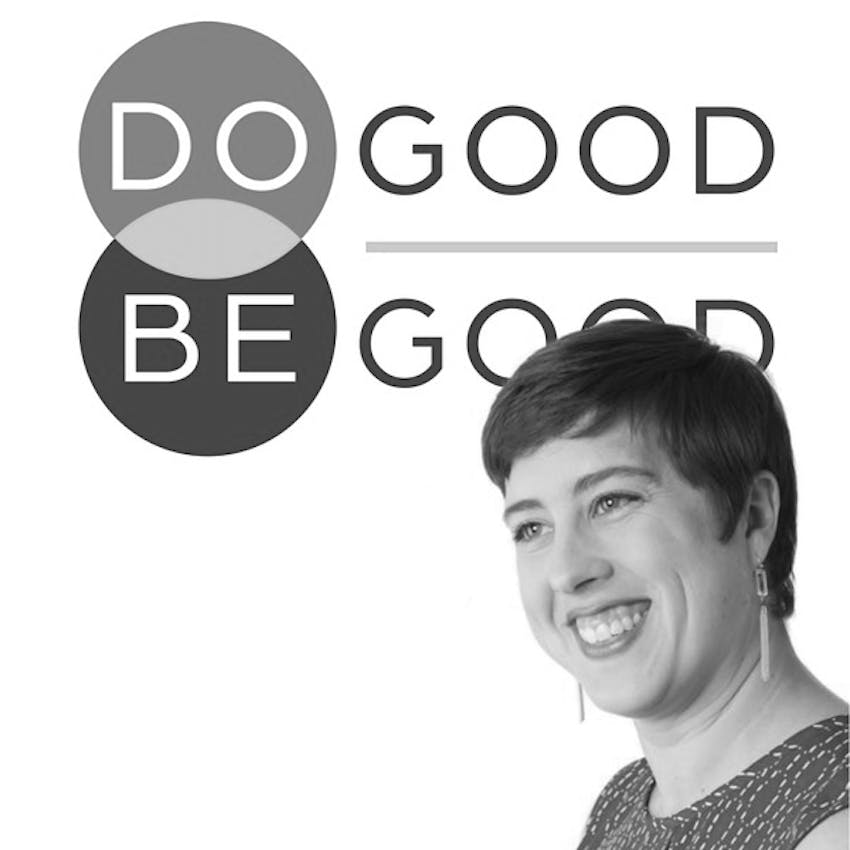 Do Good, Be Good

#2 (Rebroadcast) And Then There Were Four

This is a rebroadcast from October 2017 in preparation for an update next week. Today’s guest is Gina Marie Byars, Station Manager of Sun Sounds of Arizona. I have known Gina for years through her community service work in Flagstaff. On the show she shares a personal story of taking in four young children and the effect it has had on her her life.

ANNOUNCER: This is Do Good, Be Good, the show about helpful people and the challenges they face in trying to do good. Your host is Sharon Tewksbury-Bloom, a career do-gooder who also loves craft beer and a good hard tackle in rugby. Sharon speaks to everyday people about why they do good and what it means to be good.
MS. BYARS: We filed for emergency custody of all four of the children so suddenly there was seven people in a two bedroom two bathroom apartment. And it worked… we basically stacked the children on the bed. We had a large bed and a top bunk bed and the kids figured out how they could share. They were still pretty small. So that was two months worth of … they were with us .. and it was this emergency custody piece and then there was this thing going on between the courts. At one point the court said no, you can’t actually do this, so the custody went back to their dad. And we’re like OK… and he said to us, you need to stay out of my life, I don’t want your help. And that was the hardest two months of my life to not have any interaction with the kids after having almost eight months of seeing them almost every day, weekends, more extended pieces.

MS. TEWKSBURY-BLOOM:Today I am speaking to Gina Byars, station manager at Sun Sounds of Arizona. I met Gina through her volunteer work and her service at nonprofits in the community. Gina has lots of stories about helping through her work, but today she is sharing a more personal form of helping. As you heard, Gina and her husband Scott became foster parents to four children. It started as an emergency custody situation, but soon after they ended up having the children live with them under a more formal arrangement with an indefinite timeline. We’ll pick up the story at that moment.

MS. BYARS: So, they came to us officially in the DCS system in November of 2015.

MS. BYARS: Mmhm, it was two days before. And even before then… we had decided… jump back a few weeks before then, well a couple of months, because in July our lease was coming due for the apartment and they said well, legally we can’t rent to more than 5 in a two bedroom apartment. In Flagstaff rent for a 2 bedroom, 2 bathroom house is ridiculous. We started looking at it and it made more economic sense to buy a house. We started looking for a house and found one within a month and closed within a month, so in two months we had a new place. We moved in October 1st. November 23rd, children are officially wards of the state and living with us. So our official title is non-licensed kinship placement foster parents. So in this very convoluted way of trying to help my brother and his kids, two years later we are now at almost October of 2017, the kids are still with us, they are still official wards of the state. You know, what’s the next step? And we don’t know. The biggest toll is on my relationship with Scott.

MS. BYARS: Especially considering they are not his blood relation at all and it wasn’t something that was even on any type of horizon.

MS. TEWKSBURY-BLOOM: And how long had you been married before this happened? Cause I don’t think it was very long, right?

MS. BYARS: It was not very long. It was.. let’s see we were married in 2014, so about a year.And then yea.. so it’s been an interesting journey, that is still ongoing. I’m saying, what is it going to look like? How do we as cognizant adults see that our relationship stays at least semi connected if not all the way intact. And I don’t know. It’s a piece that… saying that me personally, how do I refill myself when there are 6 entities in my household that need my energy and love and my input into their life. And that’s been a really big journey and I don’t know what I envisioned it being when I first took that first step out that door and said yes, we are doing this. I don’t know what I don’t what it was going to be. So it is just this space of not knowing either way.

MS. TEWKSBURY-BLOOM: That is such a difficult quandary to be in being newly married, which is hard by itself, and what it takes to kind of build that relationship into something that is healthy and strong. And like you said being at that really critical age and that window of time, I can imagine saying that, Ok, we’re adults hopefully we can know that this isn’t the best way to get started, but we can try to put our needs on the back burner to take care of these precious young people who don’t have time to be put on the back burner and try to nurture them before we nurture the relationship. But that’s a hard choice to make. I don’t envy having to make that choice.

MS. BYARS: And it’s been interesting in current conversations between Scott and me, realizing that these kids have pushed us to our edges, absolutely edges and possibly to breaking points and saying ok, I … nothing, bleh. And realizing the positive and negative of that. And being pushed to the absolute edge and breaking point has made us both step outside comfort zones and and look at and not sit in some complacent place. Would I do it again if I had all of this knowledge in my head of everything we’ve gone through back to that, June 15th? It was two days after the beer festival to.

MS. BYARS: My brother says, can you take the kids? He actually, there was a text from him or something the day before the beer festival. I said, Monday, not today, not this weekend. I kind of have something big going on.

MS. TEWKSBURY-BLOOM: And that was the last time you got to put your needs first.

MS. BYARS: Mmhmm. I would do it again, I would. Part of it is just because I am stubborn. I tell the kids that everyday. I say, you’re really lucky your Auntie’s as stubborn as you are. Yea, that’s a whole ‘nother relationship thing with the kids. Because I do still believe that it’s imperative for that critical time of development. It needed to be done.

MS. TEWKSBURY-BLOOM: Do you feel you were acting on instinct to go? Especially in that original emergency custody situation? I guess I wonder… in another type of emergency, if it’s a disaster or something, people run in or they run away. And I wonder in a human crisis emergency if people respond in that sort of way in that they have certain instincts that they…

MS. BYARS: That’s a fascinating question and I like it. And I don’t know. I have to think on that one, because it could be. Hmm. That’s a really good question. And just acting on that, seeing what needs to be done… OK, this should be done … then woah, I am way out here in the middle of this, how do I now save myself as well.

MS. BYARS: Yea, the 8 year old, by that time, 7, 8 year old, she was already mom. And she cooked. I had a 7 year old who knew how to turn on a gas stove, cook eggs, cut onions, all this on her own. The 3rd one in line, who would have been 4, none of them had any fear of anything in the kitchen, because they needed to know how to do it so they could survive. So it was already at that level even though we had been involved at some level. So to think of it progressing to a point of them becoming just survivalists, was not ok. It was not something that I said, yea, they’ll survive, they’ll be ok. I always hope that children have the opportunity to be thriving members of society, not just productive, but thriving. And another piece of it, in my teaching I had seen … teaching middle school…at a school for at risk students. We were the last school before they were just done with school. They had been kicked out of multiple other schools, we were their last step and there was one boy in particular that I will always remember, and seeing the potential of our kids being in this one boy and seeing that these four kids could be exactly like this one. He was smart, he was funny, and he was completely closed down and locked out from being involved in a community level in anything. He was looking out for himself and that was it, because life had pushed him to a point of being a survivalist. He saw no value in connecting to another person unless they could meet his needs the way he wanted it. That was really tragic to see and to know that and to see that these kids, my own flesh and blood … or at least my own blood, maybe not my flesh… that they had the potential to be that young man. And I didn’t want that to happen. And to see an eleven year old boy, I guess he was 12 by the time he came to me. With these hard eyes of meeting me at his front edge, knowing that everything else that he held dear, I didn’t see at all, because he was not going to let me see it. I didn’t want that to happen to people who were directly connected to me at this point. If it was later and I came in later, I don’t know what.

MS. TEWKSBURY-BLOOM: Before we ended, I asked Gina what she thought it meant to be good.MS. BYARS: Being good, doesn’t have to be this monumental exercise, it comes down to being me.

MS. TEWKSBURY-BLOOM: I like the contrast with that and what seems like a monumental exercise that you have taken on.

MS. TEWKSBURY-BLOOM: It doesn’t have to be, but sometimes it is. Sometimes living that belief can turn into a monumental exercise.

MS. BYARS: Yea, and it started in my head small. It was a family piece, and yet now here we are.

MS. TEWKSBURY-BLOOM: Well, that’s a wrap. Thank You for listening to do good be good. And thank you to everyone who has subscribed to this podcast. If you haven’t yet, please subscribe in iTunes or wherever you get your podcasts in order to get the next episode when it is released next Wednesday. And if you like this podcast, consider leaving a review so that other people can find the show. Thank you so much Bob for your review, we love it!For show notes on this episode, including a transcription, visit dogoodbegoodshow.com. That is also where you can find the discount code for Volunteer Pro and more information about Do Good, Be Good. Thanks again to Gina Byars for sharing your story.And thank you to our host, Sun Sounds of Arizona for the recording space. Music in this episode is the track Coal Miners by Art of Escapism. You can find it in the Free Music Archive. Until next week, this is Sharon Tewksbury-Bloom, signing off.

The post #2 (Rebroadcast) And Then There Were Four appeared first on Do Good, Be Good.